This is a political rant. That’s right. It’s unlikely to benefit any business broker or any business owner thinking of selling – or even anyone considering buying a business. It is purely an unmitigated rant. Well, you might, ask, if this isn’t going to benefit anyone, why spend the time writing it? Two reasons:

1) What I’m about to tell you – if it comes to pass – will effect business brokers, business owners and business buyers.

The International Financial Law Review last week published an article with the headline, “Proposed Merger Ban Will Do More Harm Than Good”.

Now, if the first three words of that headline didn’t get you hustling on over to the adult beverage cabinet, the balance of this story should. Written by John Crabb, the IFLR’s Americas editor, the article starts off with this ominous sentence: “If proposed moratoriums on US mergers were to go ahead, they would have disastrous effects on the market and add increased pressure in areas already under stress.” The good Mr. Crabb goes on to write, “Senator Elizabeth Warren and Representative Alexandria Ocasio-Cortez are set to introduce legislation that ‘bans risky mergers and acquisitions – and stops large corporations from exploiting the pandemic to engage in harmful mergers and strengthen the government’s ability to respond effectively to future crises”. This little bit of legislative vandalism bears the Orwellian appellation, “The Pandemic Anti-Monopoly Act”, a title straight out of Ayn Rand’s Atlas Shrugged.

“As we fight to save livelihoods and lives during the coronavirus pandemic, giant corporations and private equity vultures are just waiting for a chance to gobble up struggling small businesses and increase their power through predatory mergers,” said Senator Warren. “We’re introducing legislation to protect workers, entrepreneurs, small businesses, and families from being squeezed even more by harmful mergers during this crisis and any future national emergency.”

A Voice from the Democratic Socialists of America

And now from the bartender from the Bronx: 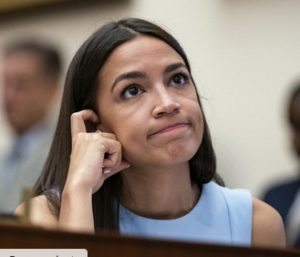 “This legislation is desperately needed. Antitrust agencies have already admitted their capacity to review mergers is reduced by the crisis. Meanwhile, reports say that Rite Aid, private equity and other big businesses are actively looking to scoop up smaller businesses and consolidate industry for their gains,” said Representative Ocasio-Cortez. “These companies should be using their cash reserves to help their employees not to acquire more power. If we don’t stop predatory M&As now, the actions of big corporations will have decades-long economic consequences — for all of us. With less competition, the whole country will see job loss and higher costs for consumers”.

What reports? “Rite Aid, private equity and other big business…” have been in the market for years – decades! – seeking to expand through acquisition or invest in promising small companies and, as is the case of private equity, help them grow faster. The Act would impose a moratorium on “risky” (as defined by people that have likely NEVER worked in private business) mergers and acquisitions until the Federal Trade Commission (FTC) unanimously determines that small businesses, workers, and consumers are no longer under severe financial distress. The moratorium includes all mergers and acquisitions that involve, among other things:

From two people who have NEVER met a payroll, we are asked to believe that, first, they and the faceless bureaucrats at the FTC, would define “risky” for us, the plebeian illiterates. That they would have the power to determine in their sole and exclusive opinion, “…that small businesses, workers, and consumers are no longer under severe financial distress.” Any owner of a small business – in fact, anyone with a three-digit IQ – could tell them that EVERY small business is almost always under financial distress – least as far as the owners are concerned. One of my favorite expressions is, “If it was easy, EVERYBODY’d be doing it!” That’s one of the reasons why not everyone owns a small business. And if our two heroines were to actually ask workers, they’d find out that workers always feel they are under financial distress. Most consumers – being workers themselves – will also claim to be under financial distress at any given moment. Thankfully, this lunacy will not become law any time soon – or at least until the left controls both chambers of Congress and the presidency. But this is the crap that people under no “financial distress” come up with when their ultimate objective is more control over those of us who pay their handsome salaries – which in this case happens to be $174,000 for each of these nitwits.

It is my firm belief that one of the requirements for political office is a minimum three-year’s experience meeting a payroll. Neither of these knuckleheads has EVER met a payroll. And if you think this will be temporary, Bucko, it’s time for a little reflection. To quote Ronald Reagan, “The closest thing to eternal life is a government program.” Buckle up, my friends. If this crowd ever gets into power, the ride is going to get tough. If you have any questions, comments or feedback on this topic – or any topic related to business – I want to hear from you. Put them in the Comments box below. Start the conversation and I’ll get back to you with answers or my own comments. If I get enough on one topic, I’ll address them in a future post or podcast. I’ll be back with you again next Monday. In the meantime, I hope you have a safe and profitable week! Joe